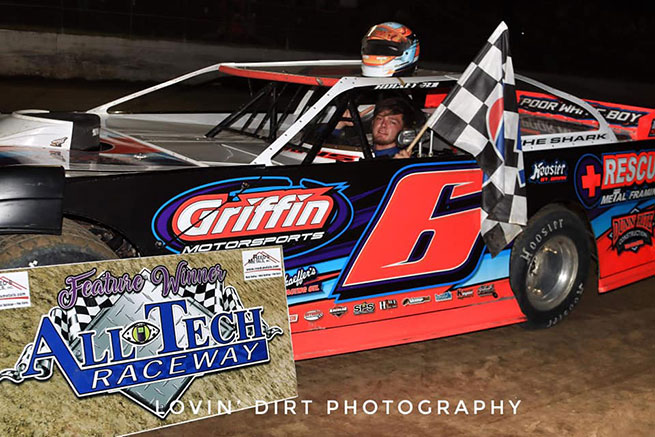 We at All Tech Raceway wanna thank each and everyone one of you drivers, fans and families for your outstanding amount of support. You all sure know how to make us feel the love. And you know this week on the Discovery Channel is “Shark Week”! Keep that in mind!!!

Everyone started coming in around 2 and didn’t stop until after the features had started. I made it up to the tower after the beginning of our first feature.

I missed the beginning of the Reed’s Metal’s C-Class 602 Late Models. As I walked in it would have 7 laps to go. Clay Harris (6) was out front. But Trey Mills (14jr) is trying both high and low lines just after the restart to get Mike Kopka (12k). As he was able to make it stick to make the pass and take third place. As Clay “The Shark” Harris (6) would bring them to the Checkered Flag followed by Mark Whitener, Jr (5), Trey Mills (14jr), Mike Kopka (12k) and Jackson Hise (388) rounding out your top five.

Next up would be the Pure Stock Division. With a very stance field of cars on tap for this race, the Green Flag would wave. Donnie Oden (22) would spin in front of this stacked up field, and every driver missed him. WOW! Great job by all drivers for your amazing driving and missing him. After a couple restarts, we get a good one. We are three wide after this restart. With Kent Corbin (7), John Roling (18) and Joey Haslauer (57) battling it out. On the move now is Devin Walker (55) he is up to fifth place now. But as he enters turn 3 go goes in a little too hard making him push off of turn four to give up a spot. After some contact on the turn four wall, we will have a two lap shootout to the finish. Green would wave, Haslauer (57) would make a clean start and he never looks back. Joey Haslauer (57) would bring them to the Checkered Flag with Sparks Flying John Roling (18) follows, Curt Spencer (12), Bubba Roling (18B) and Shawn Creech (07) to round out your top five.

Next up would be our Southern Clash Late Models battling it out for a $3000 pay day! Very, very stout field of the best driver’s in the South on hand. Two Veteran driver’s on the front row, Mark Whitener (5) and Ivendent Lloyd, Jr (07). They would bring the field to green. Battles all over the track before we even complete a lap, but Mark Whitener (5) leads the field back to the Flagstand to complete lap number one. Now we see the “Shark” Clay Harris (6) lurking, looking to make a move on the Veteran’s, as he is looking to take second place from Lloyd (07). Great battle for fifth place now between Chad Tuten (51), John Baker (14B). As Tuten (51) would take it. We have caution bunching the field back up. Harris (6) would take an advantage of that restart as he takes the second place spot from Lloyd (07). As hard lunch would strike Lloyd (07) as he brings her into the pit area. Now with a very commanding lead over the field Whitener (5) would have hard luck strike him as well, as he breaks a driveshaft and J-bar ending up in the wall and ending his night. Now, the Lurking Shark, Harris (6), would be in the Hot Seat to take the green. Will it be a true “Shark Week” at All Tech Raceway as well?? After the restart they are battling hard everywhere for those final spots. Trey Person (21) is looking to take Kyle Vansickle (3K) for the fourth place position. And he makes a successful pass. As we have Clay “The Shark” Harris (6) leading them to the Checkered Flag, followed by Jason Fitzgerald (7), Chad Tuten (51), Trey Person (21) and Kyle Vansickle (3K) rounding out your top five.

The Woodmen Life Street Stocks would be up next. Nice field of cars for this one as well! We would see the Green Flag wave as Heath Walker (55) would lead them around for the completion of lap one. But Jason Garver (12) would take that lead as he drives it in deep in turn one and two. Battle is heating up for second place between Sammy (Sambo) Hatcher (B1) and Shawn Washam (12). Moving through the field is Cameron Metts (37) as he is up to fifth place now. Now Walker (55) takes that lead back. After a quick restart Walker (55) out front, but we now see Hatcher (B1) looking at Garver (12) for that second place spot. He makes it stick and takes that second place spot. They will stack back up with five laps to go. Will we see another week,like the last race between Walker (55) and Hatcher (B1)?? This week Walker (55) is a little more commanding and not letting Hatcher (B1) get him this time. As we see the Mayo Missle Health Walker (55) take the Checkered, followed by Sammy “Sambo” Hatcher (B1), Jason Garver (12), Shawn Washam (12W) and Ethan Butts (27) rounding out your top five.

Next and final feature would be the SCDRA division. Great field of them as well, getting ready for their $5000 to win on October 9th and 10th at All Tech Raceway. Wild start as the green flag waves, we see Christian (30) leading the back to the Flagstand. They are battling hard all over the track, two and three wide. You can hear them tapping the gas, imagine if they could get a good grip how fast these guys would be?? The man on the move is Wayne Risner (22) as he was a late arrival. Most know the Bristol Strong story by now, and they had a benefit for his daughter on Saturday making it late for him to get to the track. But he isn’t letting that slow him down for sure. Battle now is for the lead between John Windham (65) and Christian (30) as Windham (65) takes it. With just a few laps remaining, he never looks back. John Windham (65) would bring them to the Checkered Flag, followed by Christian (30), Wayne Risner (22), Smith (162) and Walker Windham (72) rounding out your top five.

Race report are as they come across the line. Official finish will be after tech.

Hope to see you all in two weeks ,August 29th, as we have the 604 Crate Racin’ Late Models, Reed’s C-Class 602 Late Models, Woodman Life Street Stock and the Pure Stocks.

Thanks to all of our amazing Sponsors at All Tech Raceway. We simply could not do it without each and everyone of you!!

Results are not official