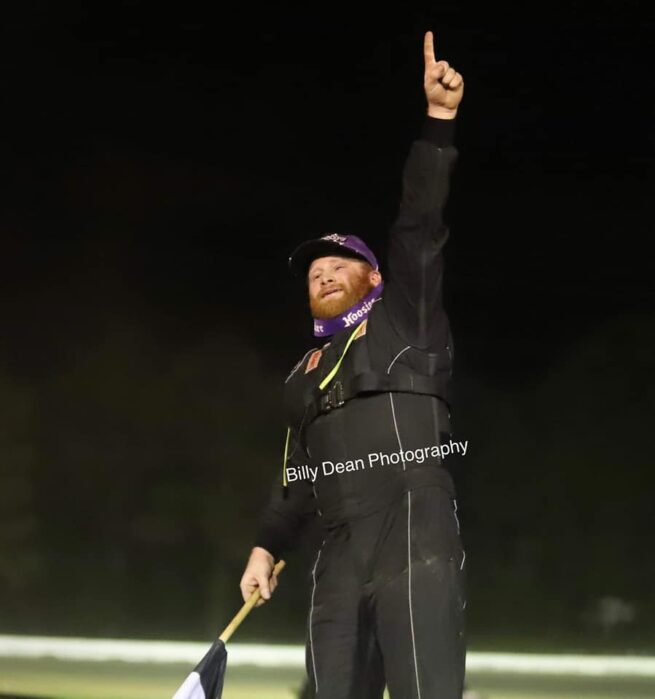 Today we would honor such a wonderful and very talented man, Mr. Harvey Jones. The fans, cars and crews sure came in groves and showed us how the Legend meant so much to them.

The first feature of the night, which showed to be an action packed race. Green flag would fly. We would see Patrick Williams (56) out front and would lead the field back to the flag stand. Cars are all over the place making passes 2 and 3 wide at times. Jason Garver (01) would start making his way to the front after starting near the rear of the field. As we see Shane Taylor (82) start gaining on our leader. As our leader was making his way through lap traffic, one of the lapped cars squeezed Durden (56) in the turn 4 wall. After all was said and done Williams (56) would be able to come back to race. After the restart, Bubba Roling (18) would take a wild ride on the turn 2 wall. Man at the action!!! Patrick Williams (56) would lead the field to the checkered flag followed by Zach McDaniel (m25), Shane Taylor (82), Justin Durbin (2b) and Jason Garver (01).

Second Feature of the night would be the Skeeter Cars/ Southern Modifieds. Green Flag is in the air, we would see a big wreck going into turn 1, taking out a lot of cars. Green would wave again. This time we see Lonnie Roberts (181) bring the field back to the flagstand. These cars Mr Harvey Jones sure knew how to win in. But back then a lot more work was put into these cars. We have a lot of technology now, back then you didn’t. Lonnie Roberts would lead the field to the checkered flag followed by Keith Brendell (69), Keith Kendrick (90), Richard Poindexter (14) finishing the feature.

The last feature of the night would be our $10,000 to win Harvey Jones Memorial!! With almost 40 cars showing up to make a 24 car field. We would have one of the most beautiful sites in dirt track racing, a 4 wide Salute with American Flags waving. Then we would have the green flag waved. We are 3 and 4 wide before we even make a lap. We would see Mark Whitener (5) lead the field back to the flag stand. Battle heating up for second place between Joseph Joiner (10) and Jason Welshan (01) wth Joiner (10) taking the spot. By lap five the Hunt the Front Driver Joiner (10) would be reeling in the Magicman Mark Whitener (5) and takes the spot on lap ten! After a caution we would see Micheal Lloyd (18) make his way into second place. We now have lap traffic coming into play and everyone wanting to stay on the bottom, even the leaders. We have now reached the halfway point. It is Joiner (10), Whitener (5), Lloyd (18), Will Herrington (14) and Welshan (01) rounding out your top five cars. After we stack the field up again we would have a restart and have a huge wreck that stared in the middle of the front stretch and end at turn one, taking out a lot of good cars. Green out once again, this time Whitener (5) isn’t letting Joiner (10) far from him. As they are now battling for the lead again. Putting on a show for the fans in the stands. Bad luck would strike for Whitener (5) as he jumps the wall, with his wheel and tire coming off in front of the field. Now, will this play a big part in the event as Whitener (5) will restart the race on fresh tires?? Green flag out for the last time as Joiner (10) would lead them around and never look back!!. Joseph Joiner (10) would lead the field to the checkered followed by Mark Whitener (5), Jason Welshan (01), Jimmy Thomas (22) and Clay Harris (6) rounding out your top five.

Features are as they cross the finish line, not after the tech shed or tire samples.

Thanks to all of our Sponsors of All Tech Raceway we simply could not do it with out each and everyone one of you.