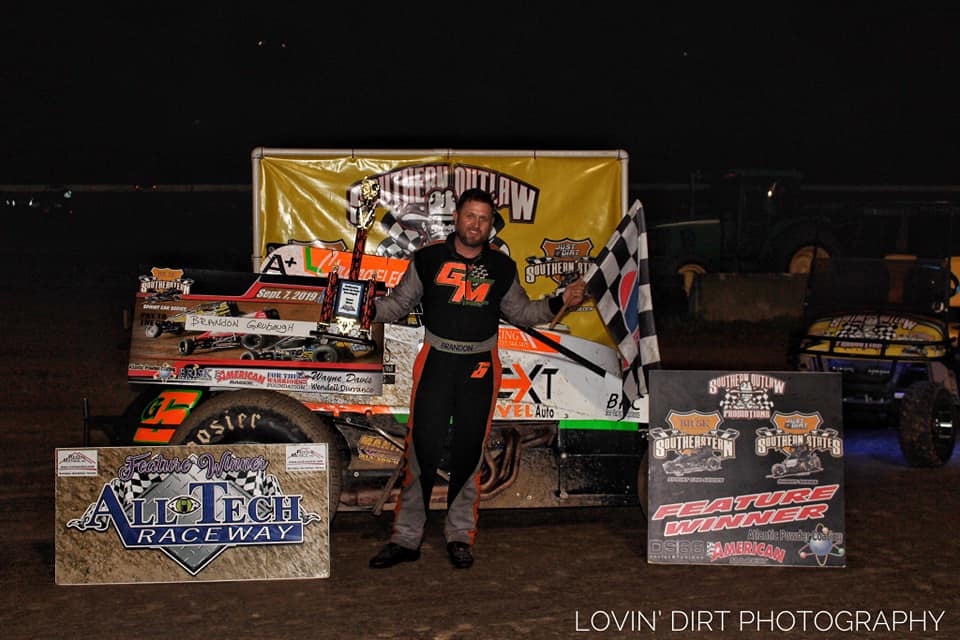 First off All Tech Raceway would like to thank all of our fans, drivers, crew members along with their families. We simply could not do this without you!

To start our feature events off we would see the Street Stock division take to the track first. Jason Garver (12) takes an early lead as he squeezes through the front row going into turn one, then leading them to the flag stand for completion of lap one. As we come up on halfway we now have Chase Collins (2×4) and David Showers Sr. (14) looking to run down Garver (12). Everyone thought Garver (12) had it in the bag, but coming down the back stretch Showers Sr. (14) jumps to the bottom of Garver (12) and finishes the pass coming out of turn 4 on the final lap, to take the Checkered Flag. Top 5 coming under the Flag stand was David Showers Sr. (14), Jason Garver (12), Mike Stalnaker (8), Chase Collins (2×4) and Kevin Mills (01).

E-Mods were second to roll out on to the track for their feature event. Exciting start to the race as they are battling hard for that top spot, As they rounded the track for the completion of lap 1 fans would see Kevin Dugger (7) taking that top spot. Jason Garver (12) takes advantage of a caution as he makes his pass for the lead. Clay Harris (21j) running down Garver (27) and tries all he had to make a move on Garver (27) but was not successful, as Garver (27) brings them to the Checkered flag. Top 5 coming under the Flag stand was Jason Garver (27) , Clay Harris (21j), Shane Taylor (82), Dylan Browning (7B) and Kevin Dugger (7).

Next up would be the Reed’s Metal C-Class Late Models as drivers showed up in full force with a 21 car field slated to take the green. Nevin Gainey (17) who started fourth in the field would get a good jump and lead the large field of cars to the flag stand, as we have a pile up coming out of turn 4 causing a caution. Devin Walker (55) takes advantage of that restart, as he powers his was to the lead off turn two. Gainey (17) would not let Walker (55) have it that easy, they battle back and forth for several laps. 2 and 3 wide all throughout the field, but the battle is still for that top spot between Gainey (17) and Walker (55), as they reach lap traffic that is coming into play now. Caution flag waives with 5 to go, but the class had already run past their time limit and it would be a green, white, checkered finish. Gainey (17) tried everything in his power to get by Walker (55), but Walker (55) never backs down and brings them to the Checkered Flag. Top five are Devin Walker (55), Nevin Gainey (17), Colton Leyendecker (33), Grayson Ott (3) and Shawn Taylor (83).

Fourth Feature of the night would be the Brisk Operations Sprint Car Series. A Great FireWorks display for the fans was provided by the series as we go green. Brandon Grubaugh (G6) leads them to the Flag stand. 2, 3 and 4 wide all over the track. With the 9 car driven by Tim Grubaugh Jr. putting out a lot of smoke, but it never slows him down he keeps on giving it his all. B. Grubaugh (G6) lead them to the Checkered Flag. Top five are Brandon Grubaugh (G6), Matt Kurtz (20K), Shane Butler (18), Bryan Eckley (12b) and Sheldon Kinser (17c).

Fifth and final Feature of the night would be the Pure Stock division. Brandon Elwood (28e) and rookie driver Bubba Roling (18) would pace the field to the Flag stand as the green flag waives. Roling (18) would master his way to the front like a pro at the start of the race. It would not take long for veteran driver Kevin Durden (33) to maneuver his way through the field to take a look at the young gun of Roling (18) leading the race. The veteran and the rookie battle for a few laps before Roling (18), gets a little excited and loses it coming out of turn 4 bringing out a caution. After green flag flies once again Elwood (28e) is able to run down Durden (33) and makes a drag race down the back stretch. Durden (33) leads them to the Flag stand and never looks back, as he leads them to the Checkered Flag. Top five are Kevin Durden (33), Brandon Elwood (28e), Jimmy Wagner (17w), Ron Adams (118) and Ralph Smith (8).